what a cool project! it’s a parent/child project, which is really inspiring, and it looks absolutely wonderful.

THE OLLUSTRIA FIELD GUIDES are three zines which unfold into maps of three different lands of the titular world. and wow, they are cool maps. hand-drawn, water colored, risograph printed perfection, to be honest!

i want to say, this is the kind of project i would have been so happy to have made with one of my parents. it’s the kind of support of art and storytelling that is so essential to fostering the imaginative spirit of a child during their formative years, and i’m so glad that they’ve already seen such great success. if you are a parent, i implore you: do something like this with your child. make a game. start a kickstarter. get their art into the world as soon as possible. it is vital. it is empowering. it is how you show them true love.

this project really inspires me to want to give to the next generation. i’ll have to figure out how i’m going to channel these feelings into something soon!

here we have a really unique entry into zinequest, the third part in a series called ZINE OF WONDROUS POWER, with this project cataloging the mythology and uses of ioun stones. it’s system-agnostic, so it can be applied to any setting, though it is heavily inspired by osr fantasy.

the creator already has an impressive collection of previous works, so there’s little worry about the project not fulfilling, and i really appreciate that they’re doing a zine-for-zine trade with other zinequest creators (myself included)! they’re also an incredibly prolific kickstarter backer, which i always interpret as great support for the community!

i’m especially excited to see the cover art by jessica “kahahuna” beauchamp whose work is fantastic!

a system-agnostic rpg zine containing herein all the secrets – sinister and sundry – of a doomed fantasy city at the end of the world.
– A VISITOR’S GUIDE TO THE RAINY CITY 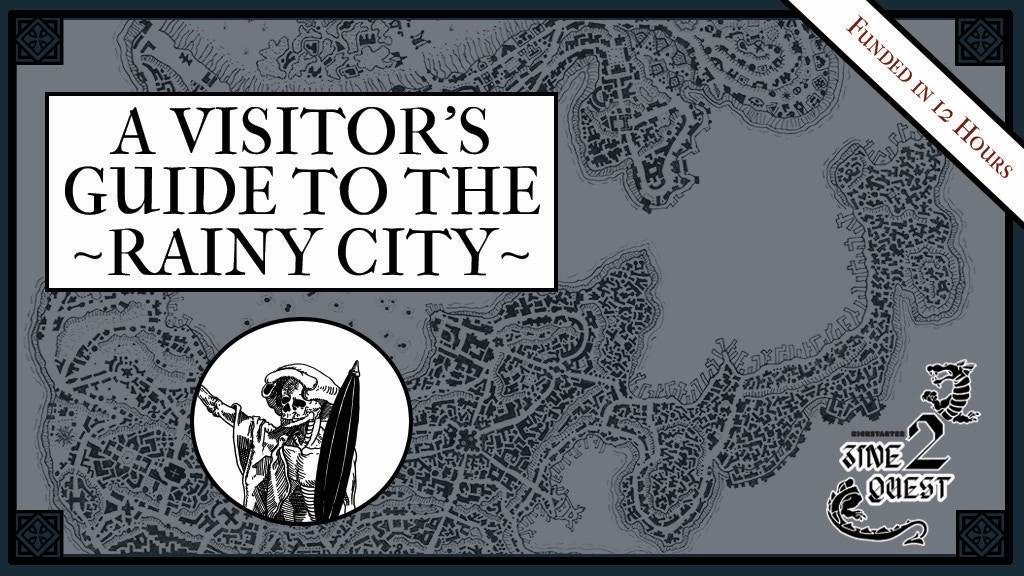 so a system-agnostic setting about a rainy city at the end of the world is pretty much perfect for me. it’s been in development and in use for 15 years, so there’s clearly rich lore, cool characters, amazing art and writing, all across a diverse city with eight districts (“with maps!”). the zine comes together beautifully, and really feels like the kind of supplement i want at the table.

an osr style setting, adventure, and 100 kinds of trash
– YOU GOT A JO ON THE GARBAGE BARGE

i love raccoons (and possums) so much. i feel like i’ve definitely said that before. the setting is a garbage barge within a fantasy framework, with the stories and details that spring forth from a fertile, underappreciated mass of discarded treasure. characters, which include raccoons (of which there are many pieces of art), are hired to work on the barge; adventure obviously ensues.

i’m so excited to see projects of this variety coming to life through zinequest: stories about themes not normally discussed; games that don’t have to boil down to number-crunching and combat; imagination games that call forth less-referenced senses. and it’s doing so well! i can’t wait to see future projects from this creator.

funding expectation: already funded and blowing through their stretch goals!

a worldbook zine written as the journal of oracles. accompanied by a playful rpg of solving mysteries.
– THE WATCHING BOOK 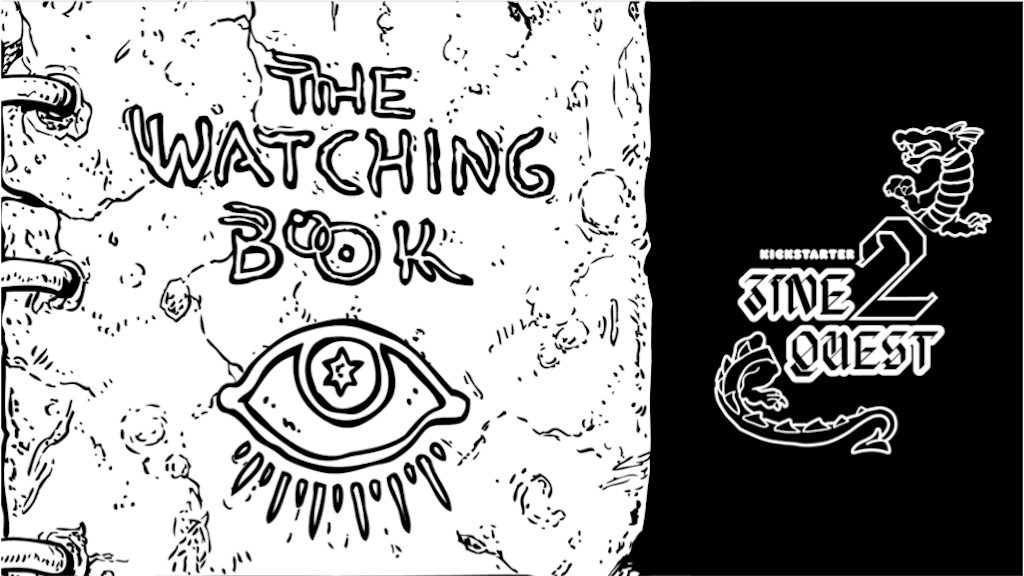 the second kickstarter within the SOOTHSAYER universe, this zine is a diegetic artifact of the setting, which is always really awesome with fantasy if done well. the art style plays well into the composition and theme; i’m always enticed by fictional foliage and herbs. it not only adds flavor, but it realizes an aspect of worldbuilding that is too-often neglected by contemporary roleplaying. plant life is so valuable to breathing life (hah) into a campaign setting!

and the game is designed by a queer woman, so of course i’m going to support it! it’s time for queer stories to be heard!

fantasy hideouts (and the npcs who run them) for adventuring parties.
– SAFE AND SOUND

obviously THE VIOLET SANCTION is also in purple ink, so it’s really cool to see this project! the color is simply stunning!

this zine is a gaming supplement, providing a variety of homes, hideouts, and extraplanar zones for fantasy characters to occupy their time, npcs for them to meet, and even quest hooks based on the locale. the art and maps look great in the purple, especially the demiplanar creature in a cloak of stars, and the project is really straight forward. i’m excited to get my hands on it and see how the risograph printing looks in person!

funding expectation: like most of the zines, this is already funded!

seven sins, seven virtues, seven districts in the city! it’s time to choose a side! a 5th edition monster book with 100 new creatures
– MONSTERS OF THE CITY

before writing about MONSTERS OF THE CITY, my thoughts on DUNGEONS & DRAGONS:

like a lot of roleplayers, D&D was among my first systems. computer games like POOL OF RADIANCE and EYE OF THE BEHOLDER cemented the game in both my childhood and digital game history. but the problem is, D&D was always a product of CHAINMAIL, and as its core components crystallized with time and experience, so too did its player base become a distillation of a specific set of rules. gary gygax may have been a dungeon master, but i don’t even consider 5th edition a roleplaying game. it’s moved, edition to edition, closer to a tabletop simulacrum of WORLD OF WARCRAFT, blending grinding and fetch quests with the tedium of rolling dice and then calculating a series of numbers on paper for some reason.

language evolves, and the term rpg is a complex one. it means very different things between mediums, with the limitations (and advantages) of crpgs requiring dramatically new definitions, broken down further by origin (jrpgs being one specific category). to me, roleplaying is a basic social function: we pretend to be something we are not yet, in hope to add something new to our repertoire. like reading or the theatre, we should walk away with a bit more empathy than when we started. i do not think D&D provides this any more. i know this is a difficult statement for many, so a caveat: you can roleplay over the game structure, but you can also play the entire game successfully without even bothering.

i once read an argument suggesting that the “role” in rpg referred to the “role” you played within the combat structure (tank, glass cannon, etc). of course, capitalism is a huge part of the problem: this game is just literally a hasbro toy now.

those complaints aside, i can still appreciate good supplements: charming art, lore, setting, characters, inventive bestiaries. MONSTERS OF THE CITY provides all that, adding 100 new monsters built around its 7 city districts, crafted with vices and virtues at its core. this forms a collection of “devils, demons, celestials, fey, undead, constructs, oozes, giants, and many humanoids”, the locales they occupy, and npcs as well.

cawood has an established history of publishing, 5 successful previous kickstarters, and this is the third in this series.

funding expectation: i have no doubts this will fund and fulfill.

rpg supplement containing tables to enhance and generate all facets of the dead, the un-dead, funerary rituals, and death rites.
– THE FORGOTTEN RITES OF THE MOLDERING DEAD

i love well-loved rpg supplements. here we have an exploration of the dead and undead. death anthropology. ghost stories. i always want to sit around a fire in the middle of the night and talk about death with fellow bards.

this is a straight forward kickstarter, from an experienced creator, with great art and a great concept. it’s already funded by over 400% with 28 days remaining, and it promises to be a great read.